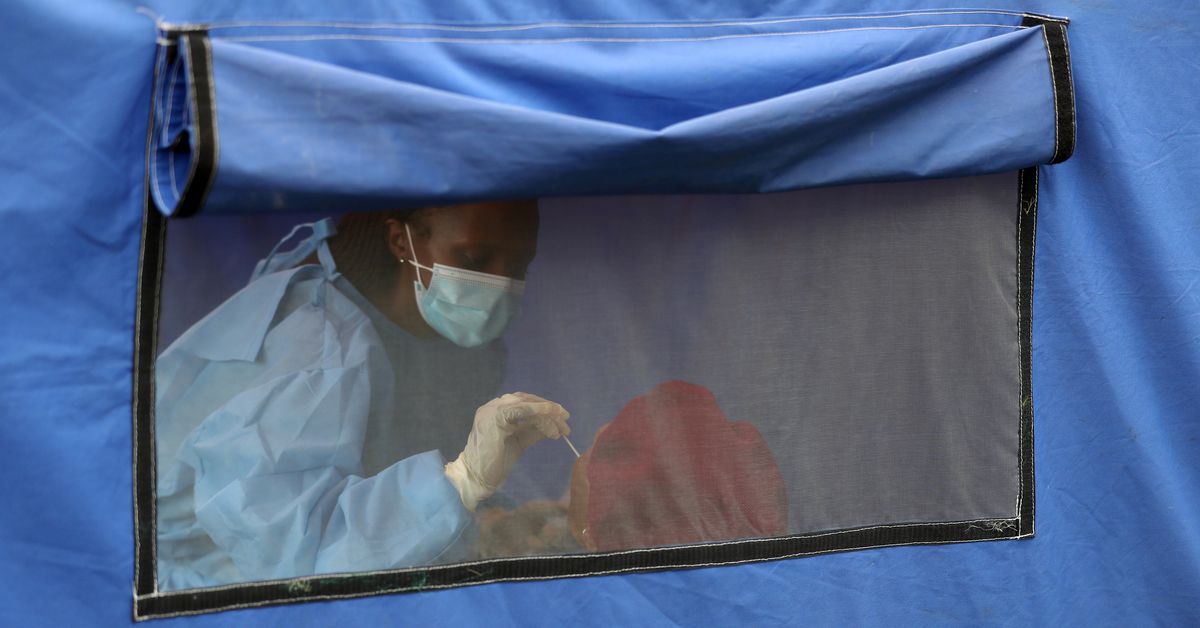 Scientists have so far only detected the B.1.1.529 variant in relatively small numbers, mainly in South Africa but also in Botswana, Hong Kong and Israel, but they are concerned by its high number of mutations which could make it vaccine-resistant and more transmissible. read more

The foreign ministry said South Africa would speak to Britain to try to get it to reconsider its restrictions, and President Cyril Ramaphosa will convene an advisory council on Sunday to consider evidence on the variant.

“Our immediate concern is the damage that this decision will cause to both the tourism industries and businesses of both countries,” Foreign Minister Naledi Pandor said in a statement.

The rand currency slumped as much as 2% against the dollar and South African hospitality stocks plummeted, as investors were unnerved. read more

Britain said the variant was the most significant one found yet after banning flights from South Africa, Botswana, Lesotho, Eswatini, Zimbabwe and Namibia. European Commission chief Ursula von der Leyen said the EU also aimed to halt air travel from the region, describing the variant in a tweet as “of concern”.

A WHO working group on virus evolution will meet on Friday to discuss whether to officially give it that label, a designation only given to four variants so far. But it could take weeks for scientists to fully understand the impact of the variant’s mutations.

A traveller is tested for the coronavirus disease amid a nationwide COVID-19 lockdown, at the Grasmere Toll Plaza, in Lenasia, South Africa, January 14, 2021. REUTERS/Siphiwe Sibeko

Two Welsh rugby clubs in South Africa for a tournament scrambled to leave as soon as possible, and British and Irish golfers withdrew from the Johannesburg Open. read more

Botswana said the four cases of the variant it had detected were foreigners who arrived on a diplomatic mission but had since left the country. It did not say which country they were from but said contact-tracing was under way.

Scientists expressed frustration at the travel bans, saying the focus should be on getting more people vaccinated in places that have struggled to access sufficient shots.

“This is why we talked about the risk of vaccine apartheid. This virus can evolve in the absence of adequate levels of vaccination. It’s upsetting that it takes this to happen to get the point across,” Richard Lessells, a South Africa-based infectious disease expert involved in detecting variants, told Reuters.

In South Africa about 35% of adults are fully vaccinated, higher than in most other African nations, but half the government’s year-end target. While the continent struggled initially to obtain sufficient doses, some countries including South Africa now have too much stock, with vaccine hesitancy slowing the inoculation campaign.

South Africa has been the country worst affected in Africa in terms of total reported COVID-19 cases and deaths, with nearly 3 million infections and more than 89,000 deaths since the start of the pandemic. It had been experiencing a lull after a severe third wave of infections, until last week when new infections started to pick up.

On Thursday, it reported 2,465 new cases, almost double the previous day’s number. Although the country’s communicable diseases institute did not link the resurgence to the B.1.1.529 variant, leading local scientists suspect it is the cause.

As Europe’s COVID-19 cases surge, U.K. ploughs on with its new normal – The Hindu
WHO classifies new COVID variant as ‘of concern’ – Aljazeera.com

COVID-19: Which coronavirus restrictions are…