A Claim of Herd Immunity Reignites Debate Over U.K.… 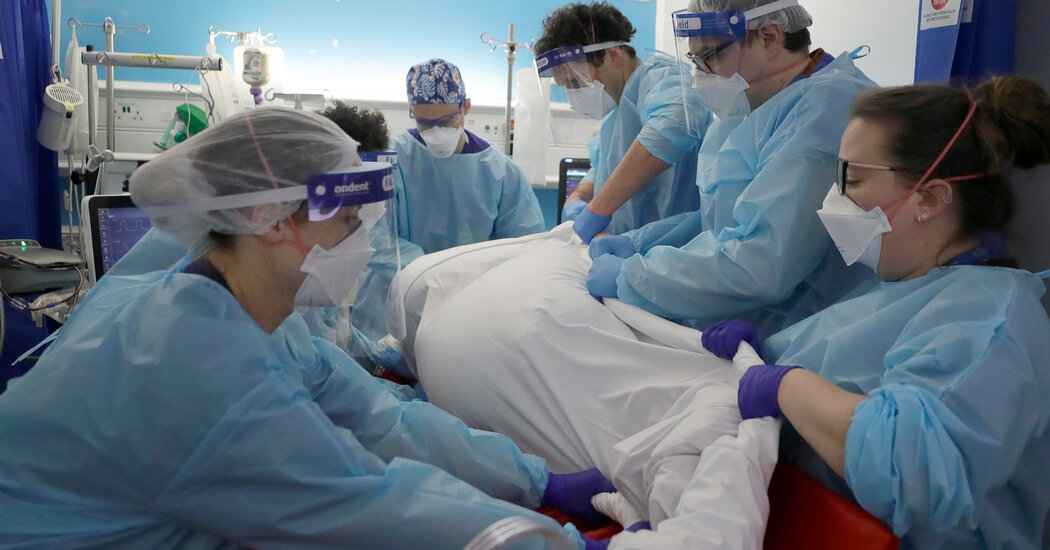 LONDON — In the four months since Prime Minister Boris Johnson took a gamble by lifting virtually all of England’s coronavirus restrictions, his country has settled into a disquieting new normal: more than 40,000 new cases a day and a thousand or so fatalities every week.

Yet those grim numbers have put Britain “almost at herd immunity,” one of the government’s most influential scientific advisers said this week — a much-discussed but elusive epidemiological state that some experts say could leave the country well placed to resist the fresh wave of infections now sweeping across continental Europe.

The comments, made in an interview by Neil Ferguson, an epidemiologist at Imperial College in London — whose projections about the pandemic have often swayed government policy — are likely to revive the debate about Britain’s status as a Covid outlier: a country willing to tolerate a widely circulating virus and a steady death toll as the price of a return to economic normalcy.

They may also touch a nerve in a nation where herd immunity has been a fraught concept since it was raised by Patrick Vallance, England’s chief scientific adviser, in March 2020 as the virus was first bearing down on Britain. His openness to the advantages of herd immunity provoked such a backlash that, ever since, the government has rejected any suggestion that it embraces such a strategy.

Speaking to a group of international reporters on Tuesday, Professor Ferguson said he expected Britain to mostly avoid the spike in cases seen on the continent in recent weeks. This was in part, he said, because so many Britons had been infected since the lockdown was lifted in July, giving the population as a whole greater immunity.

“We may well see a few weeks of slow growth but we are in some sense almost at herd immunity,” he said, adding that Britain was in a slightly better position than nations like Austria, the Netherlands and Germany where restrictions are being reimposed amid soaring infection rates.

Other public health experts are skeptical of Professor Ferguson’s theory, not least because Britain’s high infection rate suggests there is still a large number of people with little or no immunity. They say it also does not take into account other factors, like new variants or waning protection from vaccines.

“That’s a bold statement,” said Devi Sridhar, head of the global public health program at the University of Edinburgh. “I don’t think modelers have enough data to assess whether we’ve reached the mythical herd immunity stage. With Covid, it will either be when everyone has had Covid and survived, died of it, or been vaccinated against it.”

According to the Mayo Clinic, herd immunity occurs “when a large portion of a community (the herd) becomes immune to a disease, making the spread of disease from person to person unlikely. As a result, the whole community becomes protected — not just those who are immune.”

Given the rapid spread of the Delta variant, Professor Sridhar said, it is possible that Britain will reach that threshold after the winter. But that would depend on the resilience of both vaccines and natural immunity. In the meantime, she said she worried about the capacity of hospitals from December to February, when colder weather is likely to fuel infections, both of Covid-19 and seasonal flu.

Despite the government’s repeated denials that it practices a herd immunity strategy, suspicions have lingered, particularly after Mr. Johnson lifted all restrictions in England on July 19, prompting the London press to declare it “freedom day.” Scotland, Wales and Northern Ireland left some restrictions in place at the time.

Health officials argued then that it would be better to see a potential surge in infections during the summer months than in winter when the virus tends to spread more easily and when overstretched hospitals are under peak pressure.

Among the scientists who have become familiar figures during the pandemic, Professor Ferguson stands out. In March 2020, his modeling team warned that an uncontrolled spread of the disease could cause as many as 510,000 deaths in Britain and up to 2.2 million in the United States — alarming projections that led both to hasten their move to lockdown. (Britain has recorded 144,137 deaths and the United States 774,580.)

Nicknamed “Professor Lockdown” by Britain’s tabloid press, Professor Ferguson briefly quit as a government adviser in May 2020 after he acknowledged breaking lockdown rules by entertaining a woman in his house. But his views have continued to carry weight and he is again a participant on the government’s influential Scientific Advisory Group for Emergencies, or SAGE.

This time, Professor Ferguson has a more reassuring message: Britain’s elevated rates of immunity mean there is no need for further restrictions at present, even if the number of cases rises somewhat.

Professor Ferguson said the decision to scrap restrictions in England was motivated by the determination of politicians to return to normal, not to build up immunity by allowing the virus to rampage through the population.

But to some extent, that is a distinction without a difference: The number of cases reported in Britain since July is five million, more than half the total number reported since the start of the pandemic. That is equivalent to 7.5 percent of the population, Professor Ferguson said, and that figure could probably be doubled if those who showed no symptoms were added.

This rapid circulation of Covid, he said, boosted immunity in unvaccinated young people and teenagers, but also in vaccinated people — in effect, “topping up” their immunity. Combined with Britain’s effective rollout of vaccines and booster shots — about 80 percent of the population has had at least two doses — the high levels of immunity have kept case numbers relatively stable, if at a high level.

Of course, he added, the British approach was “not cost free.” The country’s daily death toll continues to exceed that of its neighbors.

“Herd immunity is not an all or nothing thing,” Professor Ferguson said. “It is something which limits transmission, and having basically flat transmission when we have — in England — no real restrictions in place is indicative that we are almost at the threshold of immunity which would stop transmission.”

For skeptics, however, there are still too many wild cards to conclude that the pandemic is running out of steam in Britain.

“We don’t really understand Covid and its many new variants,” said Tim Spector, a professor of genetic epidemiology at King’s College London, who has been leading the Zoe Covid Study, which tracks Covid-19 symptoms.

Previous projections about herd immunity have proven wrong, Professor Spector said, and the assumptions about the preconditions for it keep getting revised. In 2020, scientists said a country could achieve herd immunity if roughly 60 percent of its population were immune. More recently, scientists have revised the estimate to 85 percent, or higher — and some argue that in the United States, at least, it may never be reached.

These are more than academic arguments. The discussion of herd immunity plays into a “general government strategy to paint a rosy picture,” he said. “You hear government ministers say that 40,000 cases a day is a success story.”

Behind the debate over herd immunity lies a more basic question about whether the government was right to throw open England’s economy and society last summer, even when the virus was still circulating widely in the population.

“We act like Europe is so much worse, but we’ve just accepted a high death toll and higher infection rates for longer,” Professor Sridhar said.

U.S. has already seen more COVID deaths in 2021 than 2020 before vaccines were available, as experts again warn pandemic is not over – MarketWatch
‘Another holiday season of COVID’: Experts ‘really concerned’ about rise in case numbers – USA TODAY