Vietnam said it had detected a new coronavirus variant that combines features of the variants first identified in India and the UK and is easily transmissible by air.

Le Thi Quynh Mai, the institute’s deputy head, said the variant was not yet recorded by GISAID, the global initiative focused on sharing information about viruses, and did not yet have a name.

Pham Minh Chinh, Vietnam’s prime minister, reportedly called for “urgent response measures amid the complicated developments of the pandemic”, which is now spreading through the industrial parks at the heart of Vietnam’s export-focused, foreign direct investment-driven economy.

The B.1.617.2 variant first identified in India is more easily transmissible than other previously detected variants, according to global health officials. The B.1.1.7 first found in the UK was blamed for the severe wave of coronavirus that swept through the country last winter.

Until the full genome of the new variant has been released, scientists will not be able to assess its significance. But a leading World Health Organization scientist said on Sunday that the variant seemed to be B.1.617.2 with a single additional mutation that had occurred not only in B.1.1.7 but frequently in other variants.

Maria Van Kerkhove, senior WHO epidemiologist, tweeted: “The variant detected is B.1.617.2 with an additional mutation(s), but more info soon. Remember: variants are constellations of mutations. Many variants of concern have similar mutations.”

She added: “We expect that more variants will continue to be detected as the virus circulates and evolves and as sequencing capacities are enhanced worldwide.” 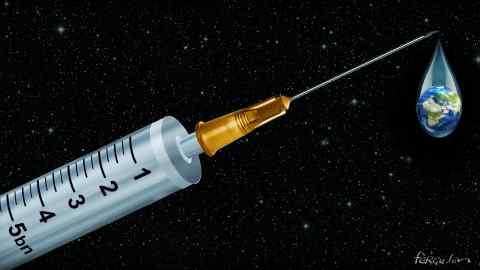 Vietnam’s announcement comes as the communist-ruled country, which was commended last year by international health officials for containing Covid-19 successfully, contends with its sharpest increase yet on new infections.

The number of cases has more than doubled this month to more than 6,900 with 47 deaths reported. The outbreak has prompted officials to impose new lockdowns in the country, where for much of the past year life and business had returned largely to normal.

Long, the health minister, said Vietnam’s new wave of infections was characterised by multiple sources of infections and the presence of different variants. He said it was spreading quickly in industrial zones, including in Bac Ninh and Bac Giang, provinces adjoining the capital Hanoi where Samsung, Foxconn and other foreign investors have factories.

Vietnam’s government said it would make vaccinating 240,000 workers in the two provinces a priority.

Other Asian nations that contained the spread of the virus during the first phase of the pandemic, including Taiwan and Thailand, are also struggling with rising infections.

Vietnam’s authorities have vaccinated about 1m of the country’s 98m people with the Oxford/AstraZeneca vaccine and have ordered more doses of the jab and the BioNTech/Pfizer vaccine with the aim of having 150m vaccine doses available this year.

Third wave of Covid may be under way in UK, scientists say – The Guardian
Italy records lowest deaths since mid-October; UK could make vaccines mandatory for NHS staff – as it happened – The Guardian

COVID-19: Which coronavirus restrictions are…