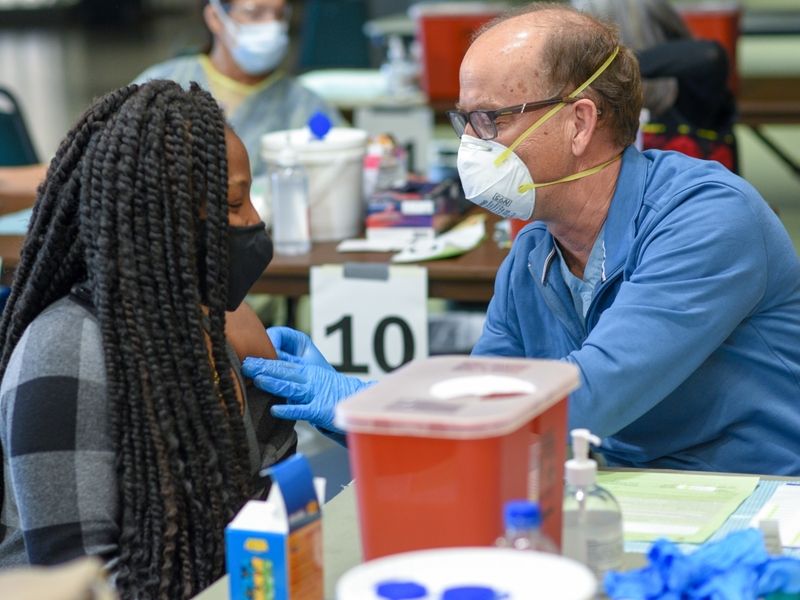 A half-million Americans are dead as a result of the novel coronavirus that first hit U.S. shores just a little more than a year ago, a sad milestone that’s left families mourning nationwide.

U.S. deaths passed the 500,000 mark on Monday. Global deaths related to COVID-19 have surpassed 2.46 million, with the U.S. leading all countries with more than twice the number recorded by the next closest, Brazil, according to Bloomberg’s virus tracker.

Hospitalizations and deaths have fallen since peaking in early January as treatments have improved, a rising number of Americans have gotten natural immunity from surviving the coronavirus, and more people are getting vaccines produced by either Moderna Inc. or the Pfizer Inc.-BioNTech SE team. There’s still a growing threat, though, from swift-moving mutations that have emerged from the U.K., South Africa and Brazil, and are now increasingly seen in the U.S., including in metro Detroit.

“Half a million deaths,” Anthony Fauci, the U.S.’s top infectious disease doctor, said on CNN’s “State of the Union” broadcast Sunday. “It’s terrible. It is historic. We haven’t seen anything even close to this for well over a hundred years since the 1918 pandemic of influenza.”

President Joe Biden, in remarks before a candle-lighting ceremony at the White House honoring the Americans who died of the coronavirus, called the loss a “heartbreaking” milestone.

“That’s more Americans who’ve died in one year in this pandemic than in World War I, World War II and the Vietnam War combined,” he said. “That’s more lives lost to this virus than any other nation on earth.”

About 657,000 in the U.S. died during the 1918 influenza pandemic with no vaccines available and no antibiotics to treat secondary infections, according to the U.S. Centers for Disease Control and Prevention. At least 50 people million died worldwide.

In the beginning of March 2020, only three coronavirus-related deaths had been recorded in the U.S. By mid-April, the seven-day average for deaths topped 2,000. There have been more than 88,200 deaths just in the last month.

While less than 1 percent of the U.S. population lives in nursing homes and other long-term care facilities, about 35 percent of deaths have occurred there as of Feb. 18, according to the Long-Term Care COVID Tracker. The need to isolate residents to protect them from infection came at a high cost as families couldn’t talk with and care for older parents and grandparents, and sometimes left them unable to say goodbye.

Lately, though, there’s been the sense that a turnaround may be possible. Weekly deaths in long-term care centers fell to 4,239 as of Feb. 18 after reaching more than 7,000 a month earlier.

The number of hospital beds occupied by COVID-19 patients on Feb. 18 fell to the lowest number since Nov. 18, according to the U.S. Department of Health & Human Services. Still, the overall number remain high at 63,523.

At the same time, more Americans have now received at least one dose of a vaccine than have tested positive for the coronavirus since the pandemic began. As of Sunday, 63.1 million doses had been given to people in the U.S., a number that leads the world. In the last week, an average of 1.33 million doses a day were administered.

To speed up vaccinations after a rocky start, the U.S. government on Jan. 12 began encouraging states to start immunizing all residents 65 and older, along with those ages 16 and older with certain medical conditions.

The changes would open vaccinations up to more than a third of the U.S. population. The Biden administration has said that it’s working to expand the supply of vaccines to help meet that goal.

By speeding up vaccination, health officials hope to cut off the spread of the mutations emerging from the U.K., South Africa and Brazil, the latter two of which have shown an ability to weaken — though not yet overcome — the Pfizer vaccine.

The mutation that emerged from the U.K. has been particularly aggressive, identified in 1,523 cases in 42 states as of Thursday. Federal officials have expressed concern it could soon become dominant nationwide.

The variant from South Africa, first identified in the U.S. on Jan. 28, has now infected 21 Americans in 10 states, according to the CDC, with Idaho joining the list as the 11th on Friday. The mutation that emerged from Brazil is the latest to reach U.S. shores. It’s now been identified in five cases in four states — Maryland, Florida, Oklahoma and Minnesota.

It’s not yet clear any of these highly-contagious mutations are necessarily deadlier. But the increased level of contagion alone is a problem, with more transmissions potentially leading to further surges before the vaccination campaign can take hold.

— With assistance from Drew Armstrong and Emily Chang.

Why are COVID-19 cases rising…